Kashif, the hit-making, Grammy-nominated singer/producer died on Sunday, September 26th, at age 56. His body was found by a neighbor in his home in Los Angeles the following day. No specific cause of death was determined at the time this was written. Born Michael Jones, the talented multi-instrumentalist forged a new lane in 1980s R&B music by utilizing synthesizers to unique affect, helping to transitioning Black music out of disco into a new electronic dance era. It garnered hits for not only himself in the form of “Love Changes (with Me’Lisa Morgan)” and “Baby Don’t Break Your Baby’s Heart,” also for George Benson and Whitney Houston.

Born in Brooklyn’s Bedford-Stuyvesant neighborhood on December 26, 1959, Michael Jones bounced from one abusive foster home in the early 1960’s, and it looked like he could’ve easily become another statistic. Instead, he found his calling in the form of music in grade school in the form of a song flute with a $3.00 price tag. After excelling in music lessons in junior high with several instruments, it was his prodigious keyboard playing landed him a gig playing with the band B.T. Express, (“Do It ‘Til You’re Satified) in 1974, at age 15! Using influences like Chick Corea, George Benson and Art Tatum, his fusion of jazz chops with his mini-Moog and synthesized bass was crucial for the group, especially at a time when artists like Stevie Wonder putting synthesizers front and center in soul music. It was during this time when the true conception of Kashif happened, both literally and creatively. The name that became commonplace in many a Black household during the “Me” decade was chosen by the man himself. Each member of B.T. Express had a Muslim name, so Michael changed his name to Kashif Saleem, “Kashif” meaning “pioneer” or “discover” in Arabic. It proved to be a fateful decision as he forged out on his own. 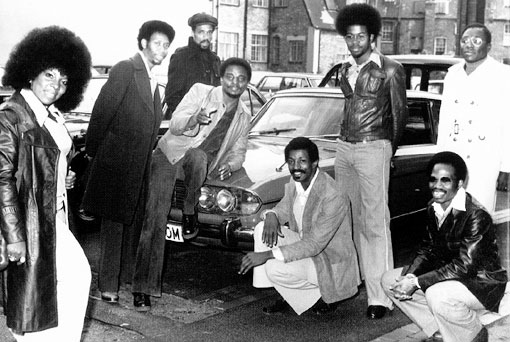 Once gone from B.T. Express, Kashif began playing in Stephanie Mills’ road band, and his demo tapes caught folks’ attention. In 1981, a song he wrote for Evelyn “Champange” King called “I’m In Love” hit the peak of Billboard’s R&B and Dance charts. After “I’m in Love” and penning Howard Johnson’s 1982 classic dance cut “So Fine,” Kashif landed a contract with Arista as an artist. His self-titled 1983 debut launched a new phase for his career, coming from behind the scenes and stepping out front and center as a singer as well, getting a top ten R&B hit with “I Just Gotta Have You.” The sparse electronic instrumentation not only was the foundation of the signature Kashif sound, but it became a template for what was to be known as Boogie, a new sub-genre that helped transition Black dance music from grandiose four-on-the-floor disco to a more minimalist, groove-driven production style. Using MIDI and devices like the Synclavier further pushed the envelope of fusing live instrumentation with software based technology. Such practices paved the way for producers like Narada Michael Walden and Jimmy Jam and Terry Lewis.

While his second album Send Me Your Love got him one of his six Grammy-nominations in his career, it was a meeting with Whitney Houston set up by Artista President and infamous impresario Clive Davis at a Manhattan night club in 1984 that expanded his reach to a whole new market. Entrusted by Davis to produce tracks for Houston’s debut album, Kashif found the song “You Give Good Love,” landing Houston her breakout pop success, thus beginning a decade of dominance by the late songstress. His work on Houston’s first two diamond-selling albums informed the whole world was the Black community had been moving to for years.

Despite his success as a solo act through five albums on Arista, Kashif’s best talents were elevating other artists via his infectious electro-soul production and equally imaginative songwriting. In fact, Kashif was so special as a composer, that he was able to craft a hit for his hero under duress. In 1983, the legendary George Benson brought Kashif in to pen a song for his In Your Eyes LP. According to an interview on TV One’s Unsung, Kashif assured his hero he had a song prepared when he actually did not. On the spot, he improvised chords, a beat and a lyric from the top of his desperate head and thoroughly impressed Benson. The result was album highlight “Inside Love (So Personal)” and it helped the LP go gold.

Throughout the rest of the1980’s, Kashif churned out hits for himself and others as a producer, songwriter and session player for the likes of Jermaine Jackson, Melba Moore and Dionne Warwick. But he made a drastic shift again in the 1990s, this time as an author and musical mentor. In 1995, he penned and published his book, Everything You’d Better Know about the Record Industry. He wrote the book as a how-to-guide for all those musicians and singers aspiring to join the music business, spouting wisdom he gained from his career, including how to assemble your “dream team,” understanding contracts and legal documents, and maximizing your potential. Over 400,000 copies have been sold, and is considered required reading for artists, both on major labels and independents. He served as a music production professor as UCLA since 1996, and then brought his life full circle by founding Kashif University in California and Florida, and the Team iCare Foundation for youth who have experienced foster care. His music certainly moved and healed millions over the decades, but his late life dedication to educating and informing people may prove the most immeasurable aspect of his legacy.

Goodbye, Kashif. Thank you for leaving the world better than how you found it.

Check out a few of Kashif’s most loved tracks:

Kashif – I Just Gotta Have You (Lover Turn Me On)

Kashif – Help Yourself to My Love