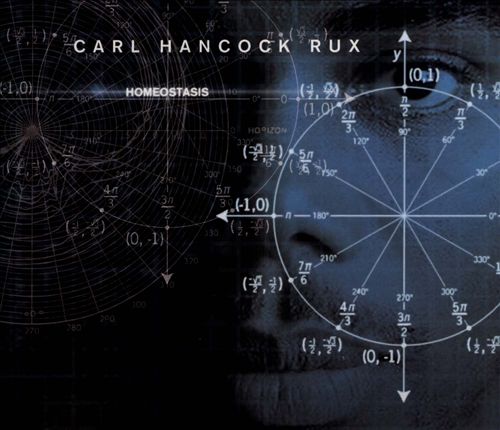 Carl Hancock Rux is a true renaissance man. Pardon the use of such an overused phrase, but what else can we call this gentleman who can lay genuine claim to titles such as author, essayist, poet, playwright, and musical artist? He has worked with Nona Hendryx, performed at CBGB, sold out shows at the Apollo Theater, and penned several novels and poetry collections. The man has certainly put in work. [Note: Rux is also a contributor to soulhead.]

And now we can add Homeostasis to his body of work. Rux’s fourth studio album is a highly contemplative piece wrapped in an amalgamation of jazz, psychedelic soul, and spoken word. It’s a sumptuous affair, filled with lush instrumentals that, more often than not, perfectly compliment his deep, masculine voice.

For instance, the moody, atmospheric “Silence Speaks Softly,” with its plaintive piano lines, wailing background ad-libs, and filtered vocals from guest Martha Redbone, provides the perfect sound bed for Rux’s longing vocals. “Old Man” alternates between song and spoken word piece, and has a slight ominous air thanks to a rather menacing arrangement of strings and echoing drums. It closes out, however, on a less ominous, horn-heavy note.

The title track is a stormy affair, with Rux singing as rhythmic drums and jazzy horns vie for attention. And the spoken word joint “So High,” with its bricolage of funky horns, muted drums, and keyboard riffs, is at once urgent and mellow; it’s as if the Bomb Squad and Noah “40” Shebib had a meeting of minds in the studio.

The aforementioned Hendryx shows up on the undeniably funky “Razor and Blade,” teaming up with Rux to augment his gale force vocals. Work it on out, indeed.

The dictionary defines “homeostasis” as “a state of psychological equilibrium obtained when tension has been eliminated.” In a word, stability. It’s an apt title because this theme carries throughout the album, as each song seems to exhibit a longing for this stability in something: love, knowledge, public acceptance, understanding of life, of self. Overall, Homeostasis is a very introspective affair, even given all its musical flourishes. It’s a testament to Rux’s talent that he is able to express such personal feelings and make the listener feel as if they are their own.

“Razor and Blade (Work It On Out)” feat. Nona Hendryx